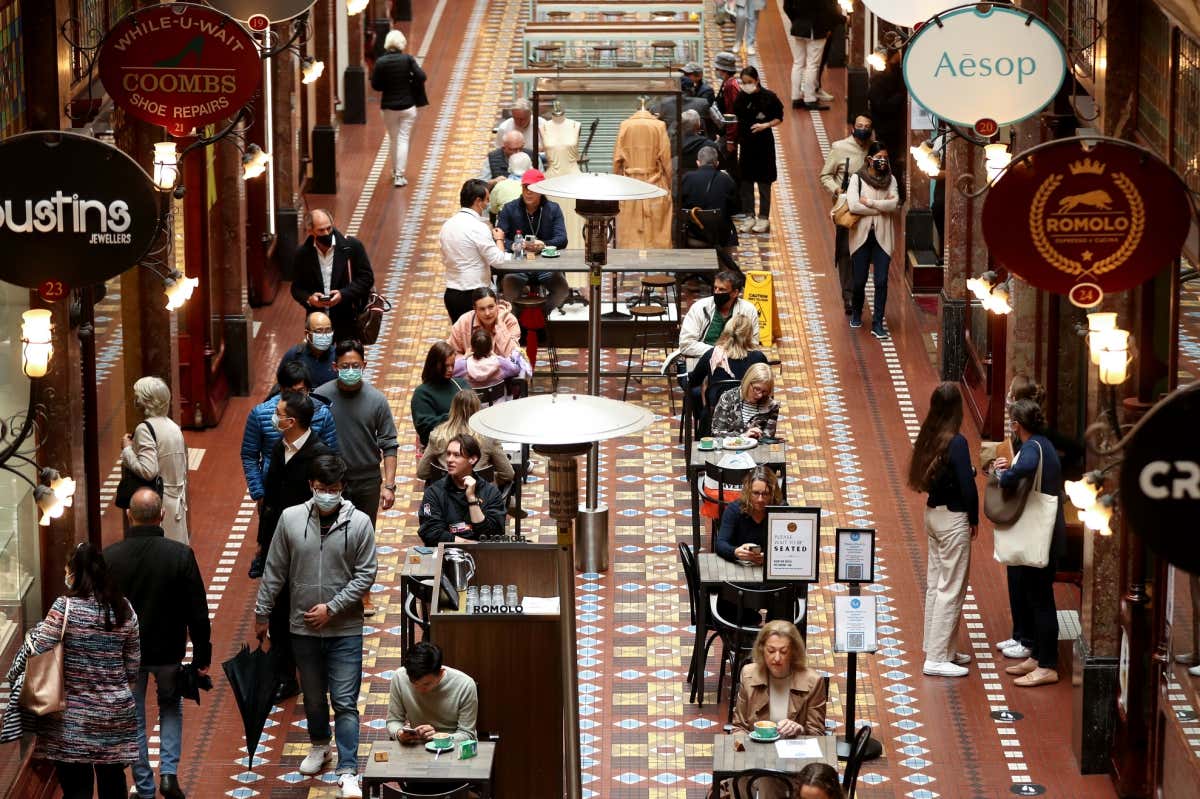 Sydney is celebrating its own version of “freedom day”. After living under lockdown for 107 days to curb an outbreak of the delta coronavirus variant, residents can socialise, dine out and go shopping again, now that more than 70 per cent of people aged 16 and over have been vaccinated.

“I think it’s the right time to start opening up,” says Angela Webster at the University of Sydney in Australia. “We’re already starting to see the effects of vaccination with case numbers falling quite steeply.”

Sydney and other parts of New South Wales have been battling the delta variant since it arrived in mid-June, ending a six-month run with almost no covid-19 cases and zero deaths.

Sydney was locked down on 26 June to limit the spread of the delta variant, meaning people could only leave home for essential reasons like buying food. The rules were gradually tightened, limiting people’s travel to 5 kilometres and introducing curfews in some areas, but delta’s contagiousness meant that new daily cases continued to soar, peaking at 1599 on 11 September.

This rapid spread was partly enabled by Australia’s initially slow vaccination rollout. On the first day of Sydney’s lockdown, fewer than 9 per cent of adults in New South Wales had received both jabs.

To incentivise vaccination, the New South Wales government promised to release Sydney from lockdown when 70 per cent of people aged 16 and over were fully vaccinated.

A concerted vaccination campaign has now seen 90 per cent of this group receive one dose and 74 per cent receive two doses. About 68 per cent of children aged 12 to 15 have also received one jab since becoming eligible.

As vaccination rates have risen, infections in New South Wales have dropped to below 500 per day.

Honouring its commitment, the New South Wales government announced it would begin easing restrictions from 11 October. Fully vaccinated people in Sydney and their children can now have 10 visitors to their homes, meet in outdoor groups of 30 and visit hospitality venues and shops anywhere in Sydney. These venues must operate with limited capacity and compulsory mask-wearing if indoors. Schools will start to reopen on 18 October.

Infections are expected to rise, but the high vaccine coverage means that most people won’t become severely ill, says Catherine Bennett at Deakin University in Melbourne. “Hospitalisations didn’t get as high in New South Wales as the models predicted and have come down faster so that’s a good sign,” she says. Australia is coming into summer, which may also help to suppress case numbers thanks to time spent outdoors, says Webster.

Alexandra Martiniuk at the University of Sydney is in favour of reopening, but thinks the restrictions should be eased more slowly to allow time for more people to get fully vaccinated, especially if the Pfizer/BioNTech vaccine is approved soon for children aged 5 to 11.

In Victoria, Melbourne – Australia’s most populous city after Sydney – has been locked down since 5 August due to a delta outbreak. The city has had six lockdowns during the pandemic – totalling more than 250 days – the most of any city in the world.

Case numbers are still climbing in Melbourne – reaching a record 1965 on 9 October – but James Trauer at Monash University in Melbourne hopes they will start to fall soon. “We’re getting very close to the level of vaccination that was enough for Sydney to turn things around,” he says.

Australia’s other states and territories currently have no or very few covid-19 cases and will keep their borders shut to New South Wales and Victoria until they hit their own vaccination targets.

The nation’s international border has been closed since March 2020 to stop travellers from bringing the virus into the country, with some exceptions including for Australian citizens and permanent residents returning from elsewhere. But the federal government recently announced that people will be able to go overseas again once each state and territory reaches 80 per cent vaccination of people aged 16 and over.

Being shut off from the rest of the world has been inconvenient, but Webster believes it has helped keep Australia’s covid-19 death toll relatively low, at just over 1400. “So far we’ve done incredibly well and have been very fortunate,” she says.