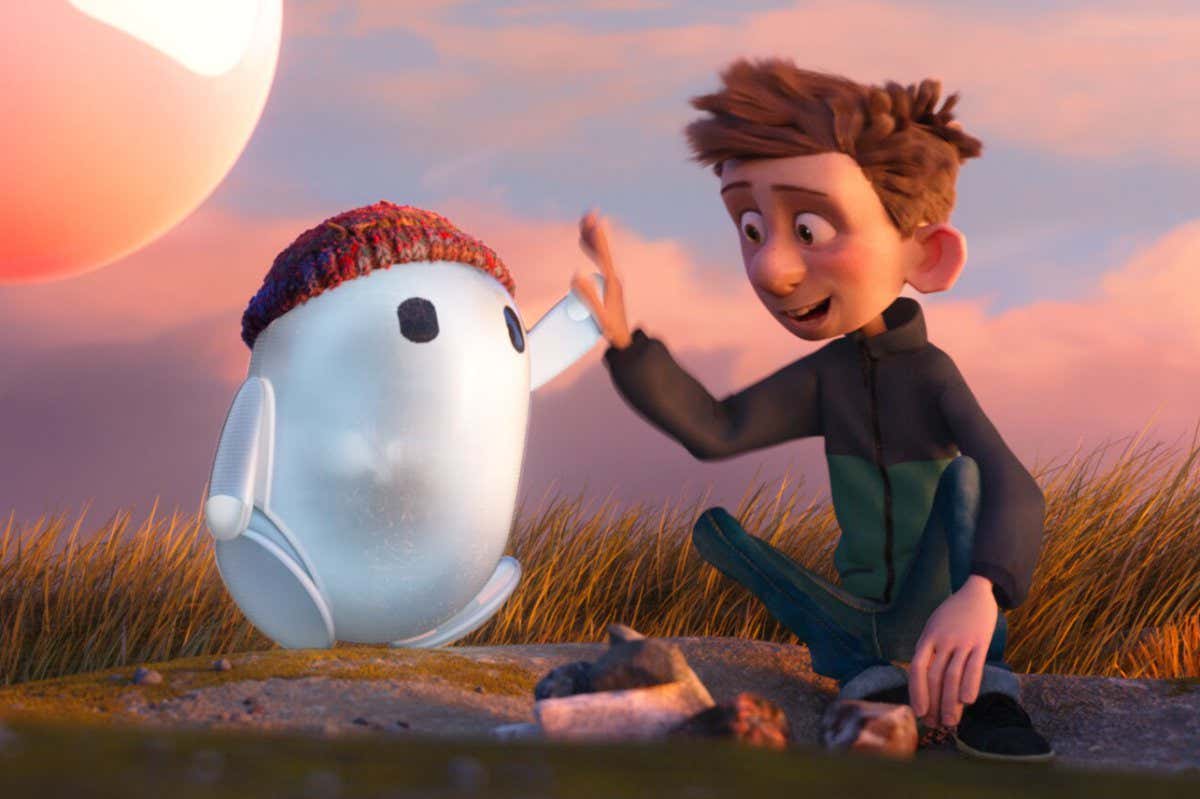 Ron’s Gone Wrong isn’t the first Disney film to employ a white, rounded robot with circular black eyes to befriend a lonely kid. Big Hero 6 presented a similar human-android team-up to great acclaim in 2014. But while that film was designed with the themes of grief, hatred, forgiveness and, ultimately, the effectiveness of non-violence in mind, Ron’s Gone Wrong is more concerned with the dilemma of social connections, both online and off.

The film tells the story of Barney (Jack Dylan Grazer), an introverted pre-teen from a low-income household who is raised by single dad Graham (Ed Helms) and live-in grandmother Donka (Olivia Colman). Barney is the only child at his middle school who doesn’t own a B-Bot, a brand new robotic device installed with an “algorithm for friendship” that was created by young, hoodie-wearing tech CEO Marc (Justice Smith).

Designed to be a “best friend out of the box” for children around the world, each B-bot is tailored to its user via data harvested from their online behaviour and social media profiles. However, when Barney is given a malfunctioning device for his birthday, one that literally fell off the back of the truck, it takes on a mind of its own and becomes Ron (Zach Galifianakis).

Given the history of robots with free will in sci-fi, the plot could have easily gone down the technological uprising route seen in the Terminator franchise or The Mitchells vs the Machines, but there is something rather refreshing about the characterisation of an AI that develops its own identity by pursuing love and friendship. It brings to mind a short story from Malka Older’s … And Other Disasters collection about an AI who has developed human emotions because of the scientist or “mother” that raised it.

Similarly, Ron’s increasingly caring, playful and protective bond with Barney is heart-warming to watch, especially when their journey takes them into the great outdoors for a few misadventures. It certainly wouldn’t be a Disney animation without some slapstick set pieces, cultural caricatures or random animal sidekicks to help push the plot forward, and some of these bumps in the road are amusing to watch. A scene in the school playground where Ron’s unlocked coding spreads like a virus to other bots is a chaotic yet ominous sight to behold.

This is where the film’s sinister undercurrent begins to spark, swiftly turning into a cautionary tale about letting children spend too much time on their devices to the point where they become hooked on making an impression online. There are some not-so-subtle messages about evil aspects of profit-driven big tech companies, surveillance society, data harvesting and the dangers of sharing too much of yourself on the internet. In fact, there is a surprising amount of thematic crossover with Netflix’s The Social Dilemma for a children’s film.

And yet, despite the rich voice performances, the characters – and the supporting ones in particular – seem frustratingly underdeveloped. The plot structure and narrative beats are overly formulaic, too. The story sets up the issues of economic disparity, technological inequality and the social effect of technology on children, but never truly broaches the subject.

Instead, the script favours the more simplistic concept of “make friends offline, not online”, though the ending doesn’t efficiently complete that train of thought. And if Hollywood immediately stopped using the hackneyed plot device of “I’m asthmatic and I can’t breathe”, it wouldn’t be soon enough. Still, Ron’s Gone Wrong isn’t without a heart or a social conscience, and a viewing might just inspire you to switch off and catch up with your friends in real life instead.