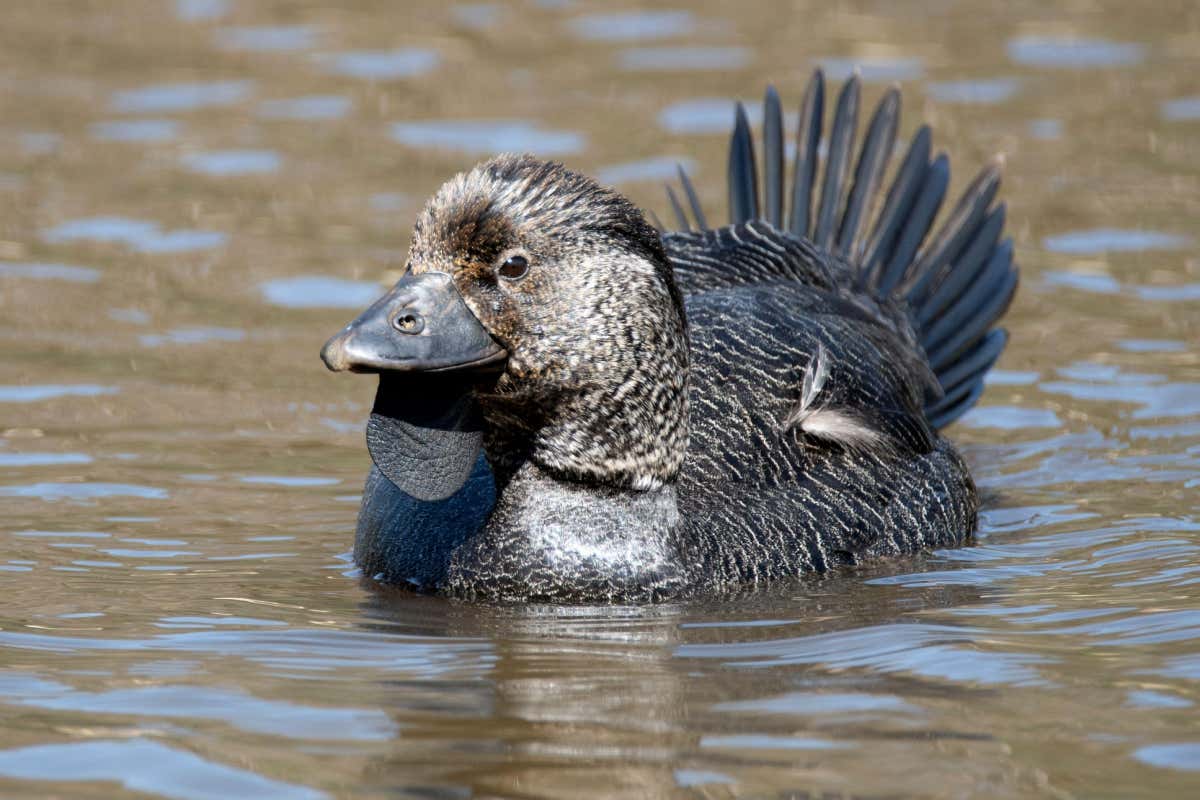 Adult musk ducks raised in captivity can mimic the sounds they heard as hatchlings, such as a pony snorting, a door slamming, a man coughing, and even what was likely a former caretaker’s catchphrase, “You bloody fool!”

The large, grey Australian water birds usually learn to make high-pitched whistles from their older flock mates. But individuals raised in captivity away from other musk dusks have been heard copying the sounds around them associated with human life.

The findings provide evidence that musk dusks (Biziura lobata) now join parrots, hummingbirds, certain songbirds, whales, seals, bats, elephants and humans (but not other primates) as vocal language learners, which acquire “utterances” based on what they hear as infants, says Carel ten Cate at Leiden University in The Netherlands.

“Vocal learning is a rare and special trait, so that makes this duck particularly special,” he says.

Ten Cate studies vocal learning in birds and was recently fascinated to stumble across a vague story about a talking duck in Australia. So he tracked down the now-retired Australian scientist Peter J. Fullager, who first noticed the phenomenon more than 30 years ago. Fullager shared his conserved audio clips of four year-old Ripper, a male musk duck nested and hand-raised in a nature reserve without other musk ducks. In the clips, Ripper waddles and splashes around speaking swear words when acting aggressively and imitating a slamming door sound when trying to attract females.

Fullager also shared an audio clip of a second male that was raised at the same reserve with his mother in 2000, along with Pacific black ducks (Anas superciliosa) that quack “like common park ducks,” ten Cate says. Female musk ducks do not perform vocal displays, and the young, unnamed duck grew up to imitate the quacking black ducks around him.

After ten Cate verified the recordings’ authenticity, he used software to confirm that the birds were repeating noises from their environment, in some cases sounds that they had only heard in the first weeks of life. In the recordings, the ducks made these sounds dozens of times in a matter of minutes, at about four-second intervals.

“When I first heard these stories I thought, ‘Oh this must be a really good joke,’” ten Cate says. “But actually they come from respected scientists and bird keepers, and the reports are very reliable. Apparently, these ducks are learning something about vocalisations starting at a very young age.”

After talking with other researchers, ten Cate discovered a case of two other parroting, captive musk ducks, raised in the UK. “They sounded like a snorting pony, a coughing caretaker, and a squeaky door,” he says. Despite these convincing stories, however, cases are few, probably because the wild waterfowl are usually too aggressive to be kept captive, says ten Cate.